SNP Spotlight, where Saigon Newport Corporation gives you the latest updates on logistics, supply chain, foreign trade information, and news. Join us to find out the latest international and domestic spotlights for the month of May.

Since China Government’s announcement on 28th March, the lock-down requirements impose restrictions on all kinds of transportation, including public roads, which will limit pick-up and delivery opportunities to airports and seaports. Ultimately this will lead to some service disruptions and delays, with a number of airlines having canceled flights to and from Pudong airport.

For shipping, congestion at the port – already very high – is expected to increase in the coming days, while overseas, terminals in Europe and North America will have to brace for an even larger whiplash effect when the city regains normal productivity – and comes as global supply chains absorb the fallout from a seven-day lockdown in Shenzhen to the south earlier this month.

Public transport will be suspended, as will production at most factories. However, essential workers, including port labour, will be exempt from the stay-at-home order.
Commenting on the ramifications for container shipping, Lars Jensen, CEO of consultancy Vespucci Maritime, stated via LinkedIn: “If this is widespread it will mean demand slow-down in the short term and downwards spot rate pressure, followed by a surge and upwards pressure.”
“Obviously this disrupts the flow of containerized cargo when truck drivers must pass many Covid tests to do their jobs. And the closure of factories this week is not improving a situation that has soured for most of March,” commented Peter Sand, chief analyst at Xeneta, going on to predict a likely further softening in spot rates in the coming weeks.

So what are some counter-measure solutions for Shipping Lines and Port to ease the impact of port congestion caused by Shanghai’s lockdown? 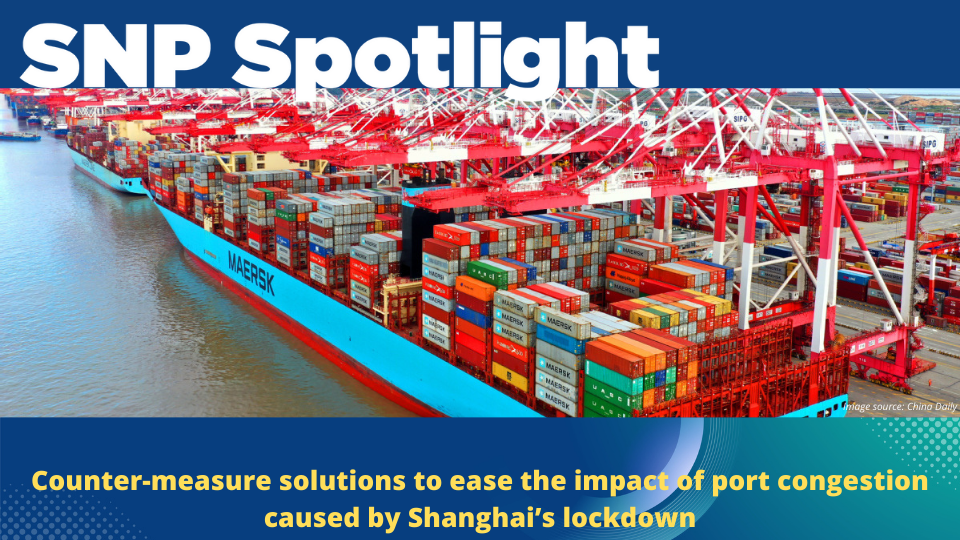 In an attempt to alleviate the pressure of lockdown on the road transportation, the Shanghai International Port Group (SIPG) has announced the launch of a container “land-to-water” service, covering the ports in the Yangshan area and Waigaoqiao area of Shanghai port to related ports in the Yangtze River Delta areas.
Under the service, customers can first transport containers to the Taicang Service Center, and then transfer them by ship to Shanghai Port and divert customers’ road transportation needs to waterways.
Bottlenecks lead Maersk to adjust shipping schedules. Ocean Network Express (ONE) has announced the possibility of delays across the supply chain due to the extension of the lockdown in Shanghai.
Despite operations remaining active at the Port of Shanghai, the company (ONE) has notified customers that trucking availability is very limited at the moment and the clearance of import cargos has been impacted as a result.
Due to reported constraints in the yard side, the Yangshan and Wai Gao Qiao PH2 terminals have been impacted the most and Dangerous Goods and Reefer may not be allowed to discharge if the quantity cannot be accommodated.
The company has announced that it will arrange alternative discharging operations if congestion escalates further and it will keep monitoring the situation. 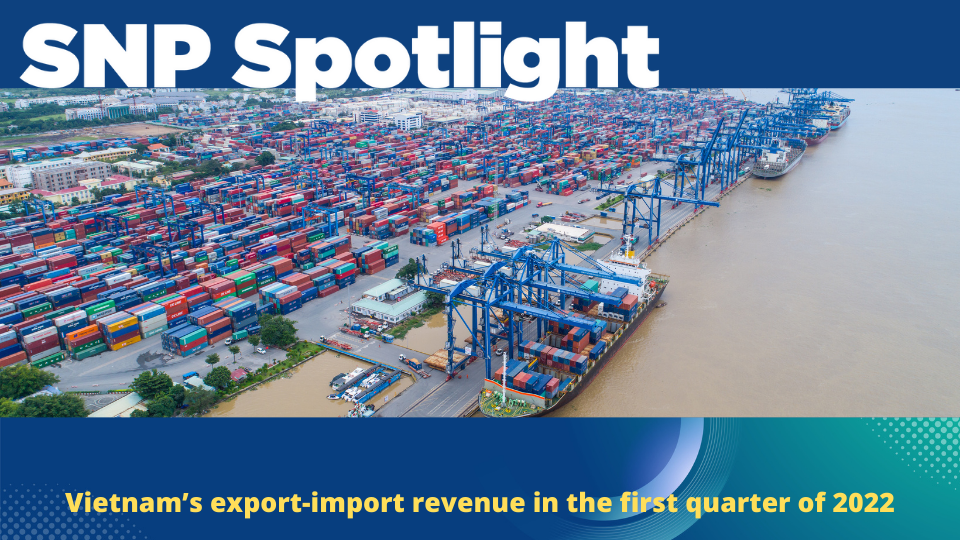 Vietnam’s export-import revenue in the first quarter of this year was estimated at 176.35 billion USD, up 14.37 percent year-on-year, of which 88.58 billion USD was from exports, a rise of 12.9 percent.

- Deputy Minister of Industry and Trade told a press conference in Hanoi on March 30 that in March alone, the export value reached some 34.06 billion USD, up 45.5 percent month-on-month and 14.8 percent year-on-year.
- The great news for Vietnam export industry in the first quarter of 2022 - an increases in both export volume and value, especially in agricultural products, crude oil, fertilisers and plastics.
Notably, up to 16 groups of commodities joined the over one-billion USD club, making up 83.4 percent of the combined export turnover, of which five recorded an export value of more than 5 billion USD.
- The country earned about 900 million USD from fishery export in March, a rise of up to 41 percent against the previous month and 22.4 percent as compared with the same period last year, pushing the turnover in the first quarter to 2.4 billion USD, up 38.7 percent year-on-year.
- During the three-month period, the US was Vietnam’s biggest buyer, with 25.57 billion USD in revenue. It was followed by China, the European Union (EU), the Association of Southeast Asian Nations (ASEAN), the Republic of Korea (RoK) and Japan.
- The ministry forecast that Vietnam’s export will continue to bounce back thanks to the recovery of the global economy, the implementation of free trade agreements (FTAs) to which Vietnam is a signatory, and supportive policies.

The ministry will continue to support enterprises in terms of market information, export promotion and the utilisation of the FTAs, it noted.